The week of the surgery was pretty crazy. The urologist saw me on the Monday, fertility clinic sessions everyday followed by the operation on Friday…things were going super fast. Everything was a horrendous haze of emotions, uncertainty and anxiety about Fridays surgery. At the time I felt lost in my thoughts for hours of each day, and emotions at times were uncontrollable. I’ll probably go into this in more details at a later date. I was frustrated I couldn’t get a handle on my thoughts, but looking back I realise how this was really a very normal response. A weird response would have been if I had been a-ok and calm about the prospect of losing a testicle!

I was seriously anxious about this operation. Needle phobia, let alone thinking about an op! I’d struggled to eat much at all that week and I’d lost around 15lb, which was weight I did not need to have lost. Going into the operation I really needed to be built up and fuelled well, so I really can’t stress enough how much (if possible) you should try to eat well before the operation.

In all honesty the actual day at the hospital for the operation was fine. I had worked myself up into a frenzy beforehand and on the morning of the operation but the actual operation itself was ok. Huge thanks to the nurses and doctors who were extremely thoughtful, I was a shivering wreck no exaggeration (I know, wuss!) and I had tons of reassurance to put my mind at rest. 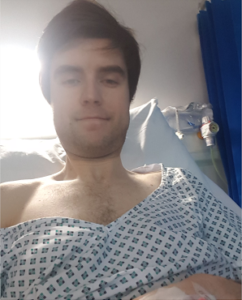 Here’s a photo of me that I took just after I had come out of the recovery area post surgery. I’m rocking the off the shoulder spring/summer 2017 range of hospital gown with the  suave ‘I’ve just been unconscious from anesthetic’ bedhair style. Dapper!

I narrowly managed to get out of hospital late on that day after a close call due to some codeine playing havoc with my gut. After around a day I managed to get off the painkillers altogether which was great as they were making me feel pretty yuck.

The next couple of weeks I had to rest, avoid driving, avoiding lifting etc. All the general stuff you would expect. It was frustrating not to be active but a huge relief the surgery had gone well. After about a week or so my mind started to drift into thinking what the next stage was ie Chemo. Unfortunately at this stage there were tests still being done and I still had to have a CT scan to check that all the ‘cancer’ had been removed during the operation.

14th March – CT scan. Again, really anxious. No need at all. Straightforward and was over in 5 minutes

15th March – Checkup with consultant. Thankfully I was given the news that although the radiologist report wasn’t yet available he was 90%+ sure there had been no spread to elsewhere and that the operation had managed to remove all. A short course / ‘mopping up’ of chemo to ensure no cancer returned (approx 20% chance of it returning unless some chemo is applied) Fantastic news.

However I got given an update on the 24th March from the Urologist nurse that the radiologist report had actually shown a stage 2 spread (to a node) and that there was some cancer still present. This really hit me, as I’d anticipated that given the checkup feedback there was real confidence that all of the cancer had been removed. I had a weird shift in emotions again, to put it very basically I had gone from feeling really positive on a whole to rapidly feeling chronically anxious that there was still something wrong going on inside of me. My focus was turning to the chemo as the course of chemo seemed like it would be very different considering there is cancer still present.

I was given the phone number of a specialist who would be deciding my treatment and his incredible reassurances and knowledge really helped me set aside my anxiety about the chemo. I’m due to have 3 cycles across a 12 week course of chemo. He also explained my post op fatigue (I’ve not mentioned but all along post op I’ve felt really lethargic, even now 3 weeks after) could be as a result of a hormone imbalance. Makes sense, and knowing this ‘justified’ how I was feeling, really helped. I can’t recommend enough to ‘reach out’ to the specialists, they are happy to answer questions and genuinely put your mind at rest. They know its a stressful time and it certainly immediately improved things for me!